The Suspense is Killing Us 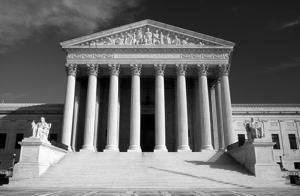 There are four Mondays left in June.  Four more days in which the Supreme Court is expected to announce its decisions in the 27 or so cases still out there this term.  That’s about one case per day from now till then.  We’re picturing the Justices pulling all-nighters, stacks of empty pizza boxes in the halls at 2 a.m. next to the burn bags (do they still use burn bags there?), and sleepy zombie-like clerks dropping in their tracks every now and then.

Some of those cases have to do with boring old civ pro or shipping or labor law.  But a whole bunch are about the cool stuff, criminal law.  Here are a few of the criminal cases we’re watching particularly closely:

This trio of cases attack the “honest services” fraud law.  18 U.S.C. § 1346 was supposed to prevent political corruption, but Congress wrote it so sloppily that it’s become a catch-all crime for federal prosecutors.  Anyone can get charged with it, and nobody knows what it means.  The Court telegraphed its dislike of the statute during oral arguments of all three cases.  We’re going to be shocked and appalled if the statute survives the month.  (Read more of our commentary here.)  The feds also see this going the way of the dodo, as evidenced by their rush to add other charges to prominent cases after the first oral arguments in December.

This one also delves into the constitutionality of a law, this one intended to stop people from providing assistance to terrorists.  Like the honest services statute, however, 18 U.S.C. § 2339B(a)(1) is pretty darn vague.  It also seems to limit perfectly lawful speech, which would also be unconstitutional.  The feds (represented by nominee Elena Kagan) seem to want the law interpreted very broadly, to maximum effect, but during oral arguments the Supremes expressed deep problems with the statute.  It might get kicked back to the lower courts for more fine-tuning of the issues, though, rather than an outright invalidation of the law.

There are a lot of federal inmates serving unfairly long sentences, due to the bizarre discrepancy in sentencing for crack vs. powder cocaine.  (See our latest piece on this here.)  In 2007, the Guidelines were amended a teeny bit, permitting a 2-level reduction for crack cases.  In 2008, that was made retroactive, so prisoners could get resentenced.  Dillon wanted to get resentenced.  But he wanted more than the 2-level reduction.  He wanted a departure from the Guidelines recommendation itself, as permitted by Booker.  But the feds say Booker only applies to full sentencing proceedings, not to resentencings like this — this is just an adjustment of the guideline range that should have been applied to a pre-Booker sentence.  As Scalia pointed out at oral argument, that would require the courts to essentially disregard Booker.  And given the universal loathing of the crack/powder disparity, we think a finding for Dillon would give the courts the ability to take the injustice into account and impose variance sentences more proportional to those for powder.

A follow-up to the Heller case a couple of years ago, which said as a matter of federal law that the Second Amendment recognizes an individual right to own a gun, which predated the Constitution.  In McDonald, the issue is whether that applies equally to the states as well, or whether the states can limit or regulate the right to bear arms.  The Court seems likely to narrowly rule that the 2nd Amdt. is incorporated into the 14th, and that the right’s a fundamental one that all the states have to respect, but not get into whether this limitation or that regulation is constitutional.  Those details can be dealt with in the lower courts on remand.

Habeas cases that we admit not reading up on when they were argued.  In Magwood, the defendant already won a federal habeas petition, and got resentenced.  Now he’s got a second federal habeas, challenging the new sentence on constitutional grounds.  He could have challenged the original sentence on those same grounds.  So the issue is whether this new petition is a “second or successive” claim that has to be rejected under the AEDPA.  Just on a gut level, we don’t think the defendant’s got much of an argument here.

Holland deals with a defendant whose habeas petition was filed too late, due to the negligence of his attorney.  The defendant wants the limitations period tolled equitably, in the interests of justice.  Florida says equitable tolling should never be allowed.  Seems like the Court’s going to allow it, but clarify when it’s available.

Also, we’re still waiting on an important case out of New York’s Second Department, which might create a new emergency exception to the warrant requirement.  Fingers crossed.