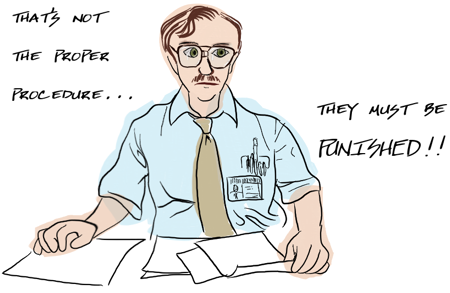 Injustice is what we’re getting. The newspapers are starting to pick up on it lately, but it’s been building for a long time. People getting prosecuted for federal felonies, when all they did was unwittingly violate some obscure regulation, without any intent to break any law.

It’s gotten to the point where Ed Meese — Ed Meese, of all people — testified to Congress yesterday that, in addition to the more than 4,500 statutory federal crimes, there are over 300,000 other regulations that don’t appear in the federal code but nevertheless carry essentially criminal penalties including prison. So the vast array of traps for the unwary that lurks out there in federal criminal law is more extensive than most people realize.”
Just think about that, for a moment. Breaking down each kind of crime into a variety of degrees, most states still only manage to require several hundred particular crimes. Congress has enacted thousands — the true number has never been counted — and the regulators have created hundreds of thousands. Most of which are strict liability offenses, requiring a prosecutor to prove neither intent, knowledge or even the slightest bit of negligence in order to secure a conviction.
Meese was testifying before the House Judiciary Committee’s panel on crime, terrorism and homeland security, as part of a series of legal experts from all sides of the political spectrum, speaking out against the insane injustice that this system has created — one in which real people, decent people, are suffering. Branded for life as felons (almost no federal crimes are misdemeanors), facing prison, fines, ruinous legal bills, lost reputations and careers… It is appalling, and it’s about time this movement started gathering momentum.
-=-=-=-=-
The problem is complex, but the solution is simple: Prohibit the enactment of any crime, except by statute passed by Congress and surviving presidential veto. No agency may define a crime or provide for the imposition of criminal punishment. Period. Make it retroactive.
If something is so bad that it deserves to be a crime, then let the people’s representatives make it so. Don’t leave it up to the bureaucrats. It’s not their job, they’re not good at it, and we all suffer from it.