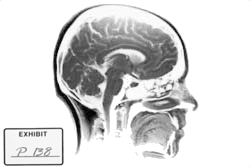 In October, we reported that functional magnetic resonance imaging (better known as fMRI) is being touted as an honest-to-goodness lie detector. Unlike a polygraph, which required interpretation of physical bodily reactions, an fMRI looks at real-time brain activity to see if brain areas associated with lying are activated during any given answer.

The issue, of course, was whether such evidence would be admissible in court. Polygraphs aren’t admissible (except in New Mexico) because they’re more art than science. But fMRI is all science, and brain scans are already widely admissible at sentencing. They are now de rigeur in capital cases, and the Supreme Court based its ruling precluding execution of adolescents on brain scan evidence.

When we wrote about it, the issue was purely hypothetical. Nobody had yet tried to introduce such evidence in court. But now, a court in San Diego is going to have to decide that very issue.

The case is a child protection hearing. The defendant is a parent accused of committing sexual abuse. Defense counsel is seeking to introduce fMRI evidence for the purpose of proving that the defendant’s claims of innocence were not lies.

If admitted, this will be the first time fMRI evidence will be used in an American court.

The fMRI in this case was performed by a San Diego company with the somewhat uninspiring name “No Lie MRI.” The company’s name isn’t so much an issue, however, as the actual reliability of these tests on an individual basis.

Although general regions are known to be associated with lying, logic, decision making, etc., their specific location in each individual varies. So some baseline analysis would be required for any person, so that his brain activity during questioning can be compared to a valid exemplar of his own actual brain.

fMRI basically measures oxygen levels in the brain’s blood vessels. When a part of the brain is being used, that part of the brain gets more blood. Studies have indicated that, when someone lies, more blood is sent to the ventrolateral area of the prefrontal cortex.

Only a few studies have been done on how accurate fMRI is at identifying specific lies, though their figures range from 76% to 90% accuracy. (For more info, see Daniel Langleben’s paper Detection of Deception with fMRI: Are we there yet? Mr. Langleben owns the technology licensed by No Lie MRI.) Ed Vul of MIT’s Kanwisher Lab told Wired.com that it’s too easy to make fMRI data inaccurate, because a defendant who knows what he’s doing can game the procedure too easily.

Of course, the big challenge to the defense in this case will be establishing that fMRI lie detection is generally accepted within the relevant scientific community. As with any other novel scientific evidence, if the relevant community is defined narrowly enough, it can come in. The trick would be in determining how narrow the relevant scientific community is in this case. If it includes researchers like Mr. Vul, for example, the defense is going to have a hard time. Even Mr. Langelben, who owns the technology used here, is on record saying that not enough clinical testing has been done to establish how reliable it really is.

We predict that the evidence will not be admitted. Down the road, sure, this stuff will come in on both sides. But right now it’s too new. Courts just don’t go out on a limb for truly novel evidence like this.

And besides, they’re trying to admit it to prove the truth of the defendant’s own statement. The issue is not whether he was lying when he declared that he believed himself to be innocent, however. The issue is whether he committed the acts of which he is accused. Whether he thinks he did or not isn’t really the point. It might be relevant at the sentencing phase of a criminal trial, but not at the fact-finding phase here.