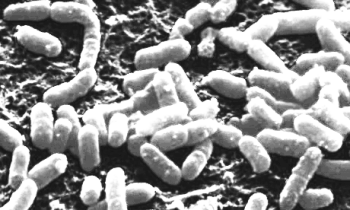 Over the past couple of days, the news has been filled with stories about using microbes to identify suspects. Everyone has all kinds of bacteria all over their bodies, of course, and whenever you touch something you leave a smudge of your bacteria behind. On Monday, researchers at CU-Boulder published a study where they swabbed computer keyboards, tested the DNA of the bacteria they found, and saw that those bacteria’s DNA more closely matched the bacteria on the computer users’ skin than the bacteria on other people’s skin.

That’s all the study found. The bacteria on your keyboard have DNA that more closely matches the DNA in the bacteria on your fingers, than that of bacteria on other people’s fingers. Frankly, although that’s a nifty result and the scientists deserve to be praised for their work, it’s really a very modest finding. Not exactly earth-shaking.

But as usual, the media took this modest finding and blew it way out of proportion. The study’s authors insist that the project “is still in its preliminary stages.” The media make it sound like we’ll be seeing this stuff in court before we know it. The fact is that using microbial DNA to link a suspect to a crime scene is not going to be a reality any time soon, if ever.

For one thing, there is as yet no reason to conclude that your particular bacteria are as unique as your fingerprints or your personal DNA. Bacteria do not use sexual reproduction, after all, and so their DNA is less diverse than human DNA. The uniqueness of your bacteria is very much an open question.

We don’t even have a baseline of what bacteria are even normal to find on human bodies. A single person will have a huge variety of different microbial populations on different parts of his skin — the microbial mix on his fingertips is not the same as the mix on his nose or his toes. All the various types of bacteria people can have will need to be isolated, all the different DNA each kind of bacterium can have will need to be sequenced, all the various combinations will have to be analyzed, and a massive amount of comparisons will have to be made.

In other words, there will need to be many more studies, based on way more data, plus some pretty robust statistical analyses of large populations, before any scientist can reach the same conclusions as those you’ve been reading in the news. That’s going to take a very long time, even with the accelerating advances in DNA sequencing technology.

Still, it really is an intriguing idea. After all, a perpetrator may not leave behind any blood, sweat or tears. Fingerprints may not be obtainable from fabric or wiped surfaces. But he may still leave behind a smudge of skin oil, containing his own unique blend of bugs. If that’s so — and again that’s a big “if” — then this could be a useful forensic tool to help figure out whodunit.